This is Scientific American — 60-Second Science. I'm Karen Hopkin.
The microbes in our intestines help keep us healthy, strengthening our immune systems and promoting metabolism. But they may also give us a leg up when it comes to moving our legs up—and down again, rapidly and repeatedly—because a new study finds that mice that are fed bacteria isolated from elite athletes log more time on the treadmill than other mice that are treated only to bacteria found in yogurt. The results appear in the journal Nature Medicine.
Aleksandar Kostic, a microbiologist at Harvard Medical School, was initially interested in how the gut microbes of people with diabetes might differ from folks without the condition—the idea being that tweaking the microbiome might help to treat the disease. But the question of enhancing overall health and fitness can also come from the other direction:
"But here the question was more, what's unique in the gut microbiome of someone who is supremely healthy? And can we use that feature of the microbiome to transfer into other people to potentially make them healthier?"
And a handy window into the gut is poop. So Kostic and his crew asked 15 runners who competed in the Boston Marathon in 2015 to provide daily stool samples from a week before the race to a week after. They also collected samples from 10 people who are decidedly more sedentary, and they tallied the bacteria present in each. 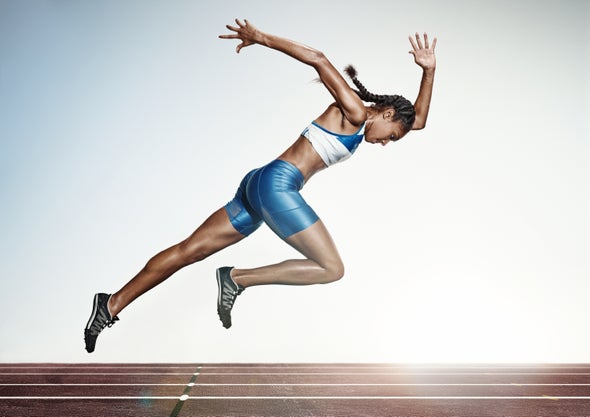 "And when we looked at this data, there was really one thing that really jumped out at us, and it was this genus of bacteria that isn't so well studied: Veillonella. We found that it was very significantly higher i﻿﻿﻿n abundance in the gut after the marathon. But not only that, it was found much more frequently in elite marathon runners than in the general population."
To see whether this microbe might provide the athletes with any benefit, they gave some to mice and then let the little rodents run. And they found that the mice loaded with Veillonella spent more time on the treadmill than those that got Lactobacillus.
"And this was an increase of 13 percent... I think any endurance athlete or any athlete in general will tell you that a 13 percent increase is pretty significant."
Now, the interesting thing about Veillonella is that they thrive on lactate, which is a chemical produced by fatigued muscle. The bacteria consume lactate and convert it into a fatty acid called propionate. Then mice that were treated to proprionate, which was delivered via teeny tiny enemas to mimic its release by gut bacteria, similarly extended their treadmill time.
"And so this creates a kind of a positive feedback loop and helps us to understand why Veillonella might be enriched in elite athletes in the first place."
Exercise produces lactate, which feeds Veillonella. Veillonella produces propionate, which somehow promotes endurance, at least in treadmill-trotting mice. Which means that gut microbes may hold the secret to extending that workout—without getting pooped.
Thanks for listening for Scientific American — 60-Second Science. I'm Karen Hopkin.